"so outstanding that it almost transcends theatre and becomes a witnessed experience of life itself ... a simply superb production" ***** London Theatre Reviews
​
In 2019 we mounted a hugely successful pilot tour of 'Drip Drip Drip', performed by an amazing cast, which wowed our audiences wherever it went.
​Now the piece has been re-developed, and is performing right now at the Pleasance Theatre London
​(tour dates can be found here).
Below are a few audience members' responses to the play:
​Written audience feedback:

"It made me feel so many emotions, a mixture of anger, fear and compassion. The way I felt all of these for all of the characters made me appreciate the quality of both the writing and the acting. Thank you for a moving evening"

"I expected humour, I didn't expect such pathos, such loss, such emotion, realisation of what we are losing. "

"So wonderful to get the opportunity to see this play. It's difficult to express just how moving and powerful I found it. I'm an immigrant who worked in the NHS from aged 18-65 and I experienced racism first hand"

"Pipeline fight the fight and walk the line. A superb play which does what any good art should do, it makes one think, look out and look in. And makes one chuckle, cry, and frankly angry. Brilliantly written and cast, expertly performed. Their stagecraft is mesmerising. One hundred minutes flashes by."Spillikins" floored us a couple of years ago. "Drip Drip Drip" does exactly the same. The proof is the awed silence when you ask fellow audience members if they felt the same. They did. And like us, they need a big space to process it."

“Extraordinary - bloody wonderful!! Both in the wide, dangerous and utterly relevant issues you explored and in the sensitive small moments of humanity you showed us - which lent deep credibility to the major themes. Thank you! We saw 1917 last night - wonderful too, but I’d give your show the awards”

“This play was brilliant. I was gripped throughout. The characters were compelling and the acting excellent. Deserves to be recognised widely. Thank you”

“I really enjoyed the play. As a doctor working in the NHS it will change how I think when treating my patients who are immigrants. Very powerful”

"Brilliant script! Wonderful acting! The best play I have seen for years. It should be on at the National Theatre"​

And here are a few sample reviews from the 2019 tour:

'Pipeline Theatre might be a tiny company from deepest Cornwall, but its work is creating theatre for the enquiring mind. What they have exposed in this production is profoundly alarming and deserves a much wider audience.'
British Theatre Guide
'This is an astounding piece of studio theatre, Pipeline is a company deserving of greater recognition.'
number9reviews
“This piece made me laugh, brought a tear to my eye and flung me into worlds I'd never taken the time to venture into before. Perhaps most importantly, it left a lasting, powerful impression and a little hope that we might move past this time of division. In a time where nationalism is the newest superbug, this couldn't come sooner.”
Voicemag

​Audience feedback from our 2019 performances:
​
"Awesome performance by @theatrepipeline about race and culture in the NHS -
very real, thought provoking & laugh out loud hilarious"
"This is a really important play with brilliant performances by the cast. It has many layers exploring racism in the NHS -
it is moving, funny & very poignant."
“Pipeline is touring theatre at its very best. I just thank our good fortune that talented actors, directors and designers are prepared to create and deliver theatre of international stature in regional theatres outside metropolitan Britain.
“I am a Year 12 sixth form student, and I have just come home from watching your play. I just wanted to say that I thought it was amazing, so touching whilst being absolutely hilarious.”
“I work in the NHS. I didn’t feel brave enough to speak in the Q&A as by that stage I was the only black audience member so the spotlight would have been in full focus. With the black characters and story lines - well done. So, so true.”
ALL PRODUCTION SHOTS BY STEVE TANNER 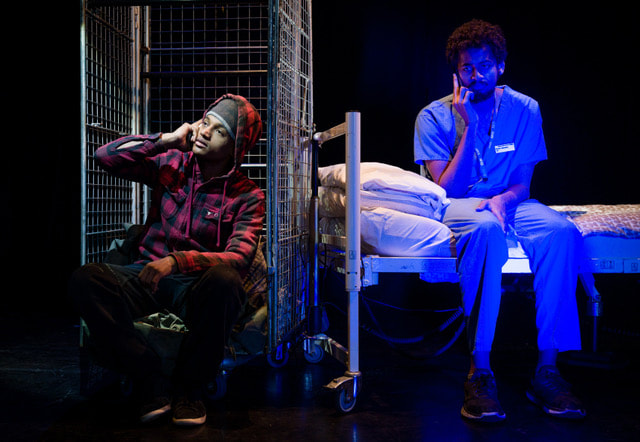 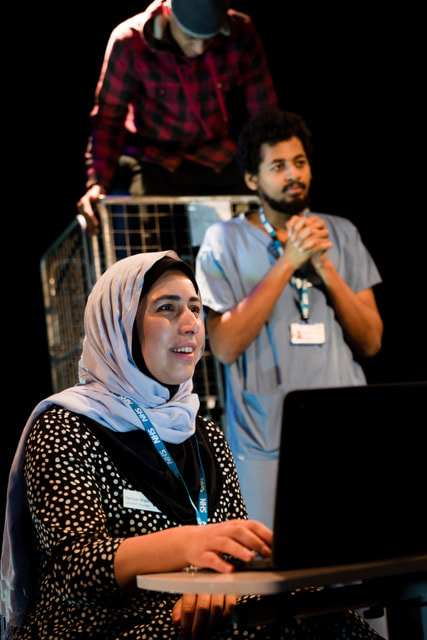 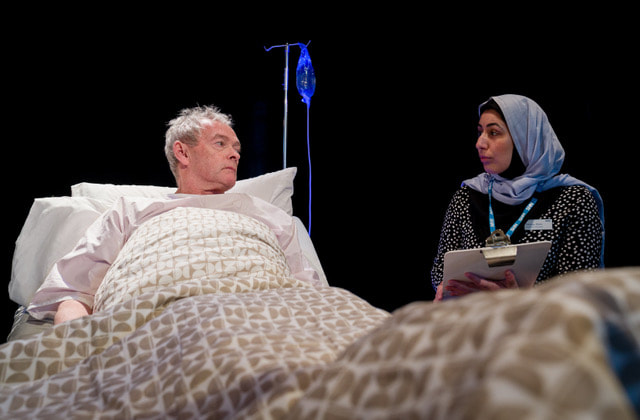 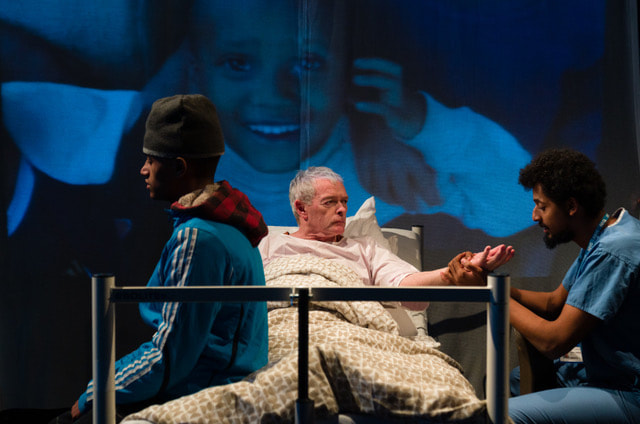 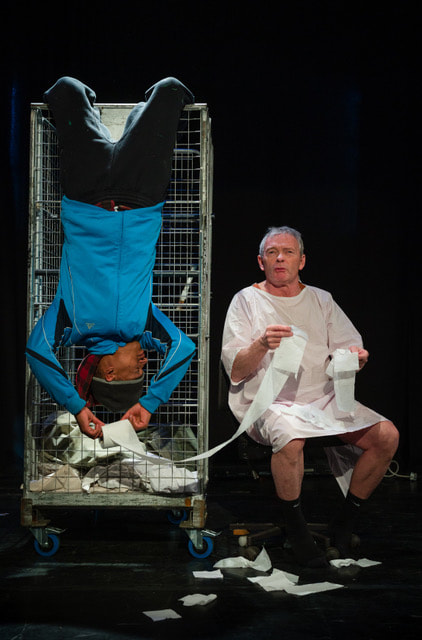 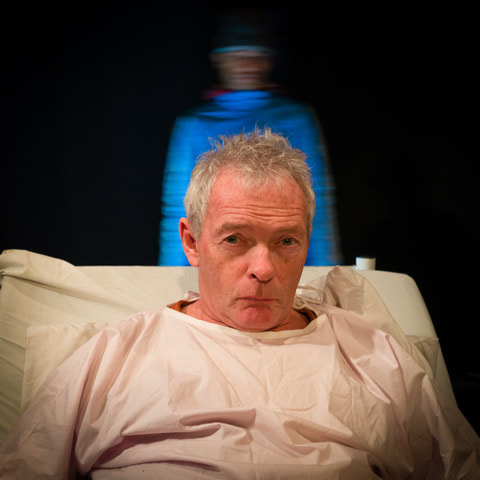 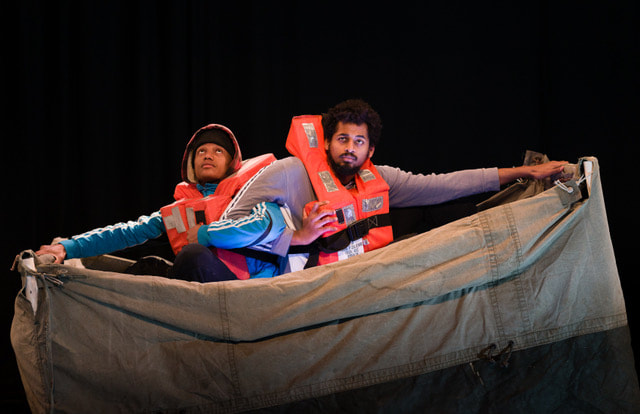 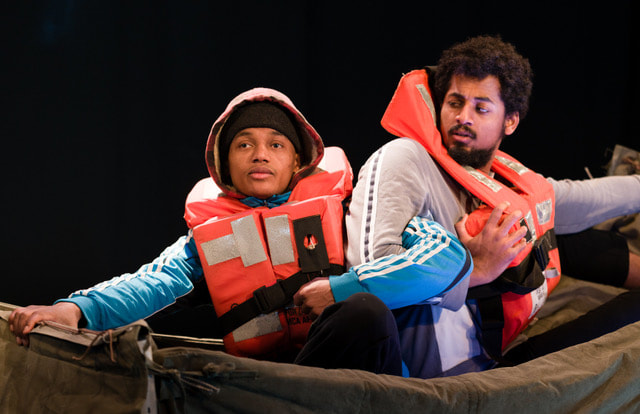 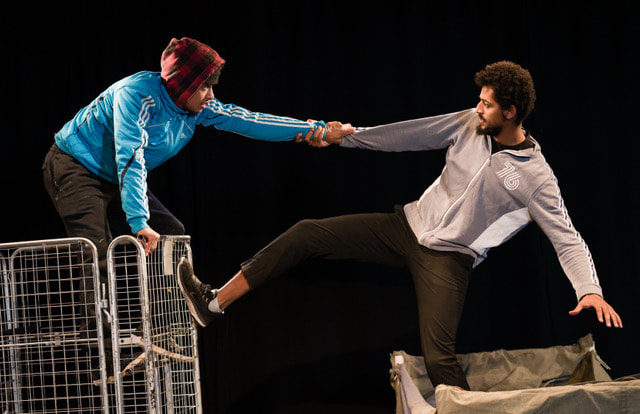 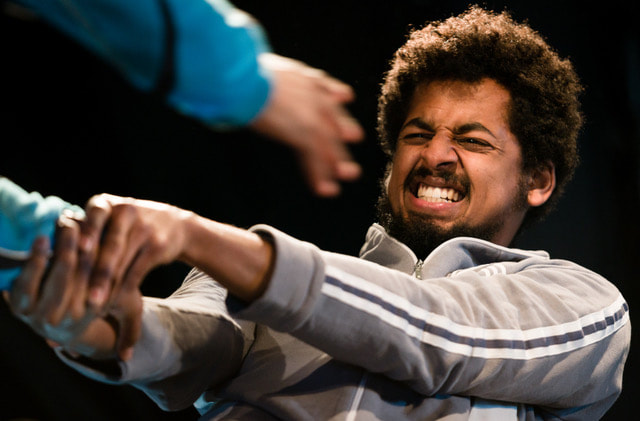 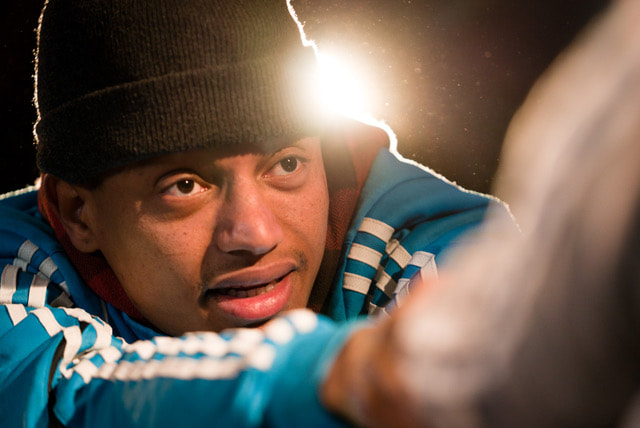 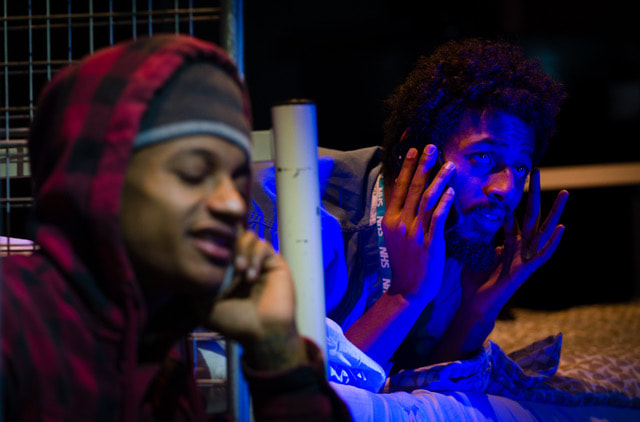 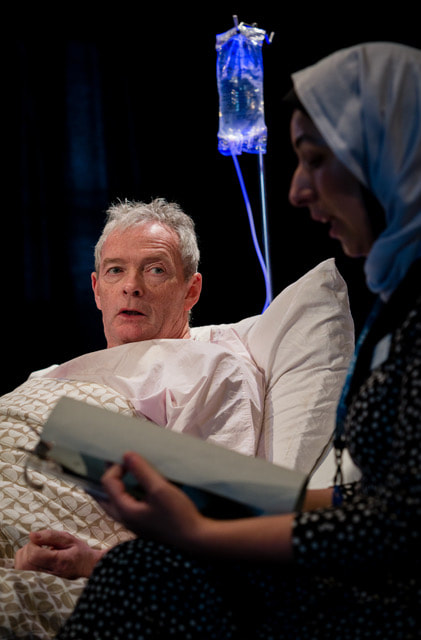 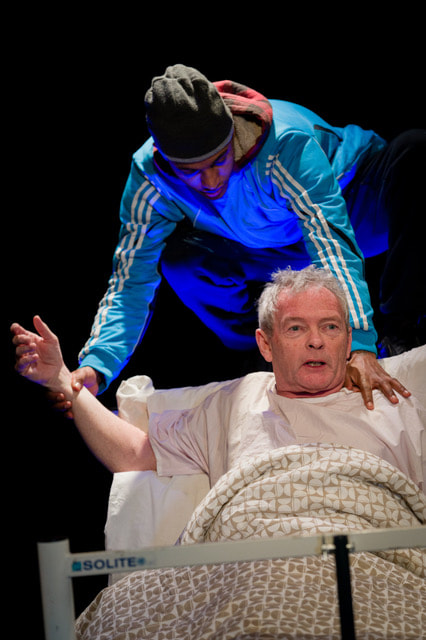 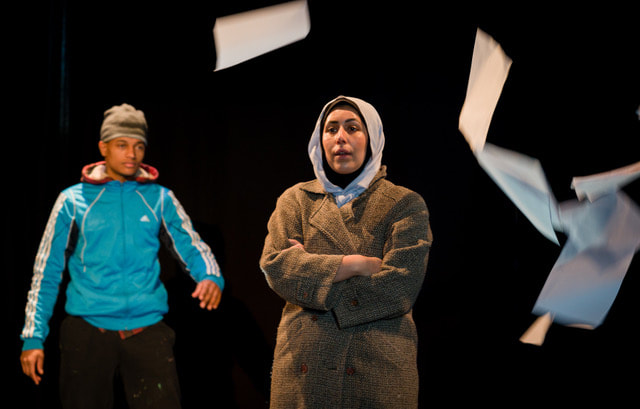 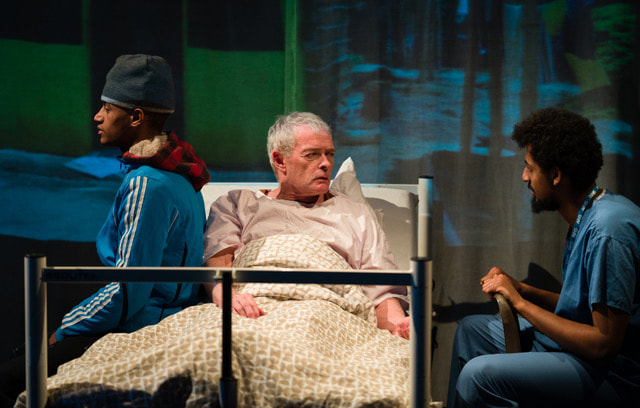 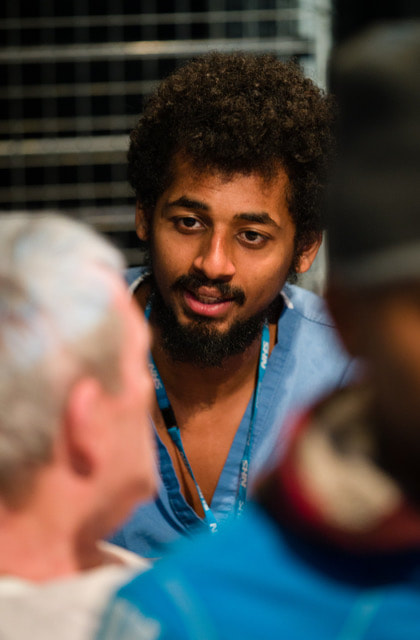 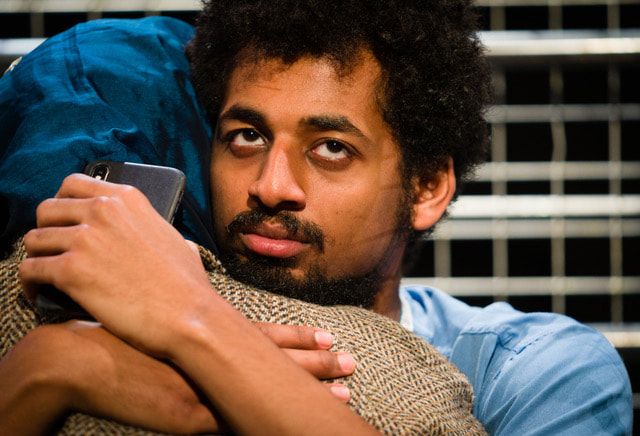 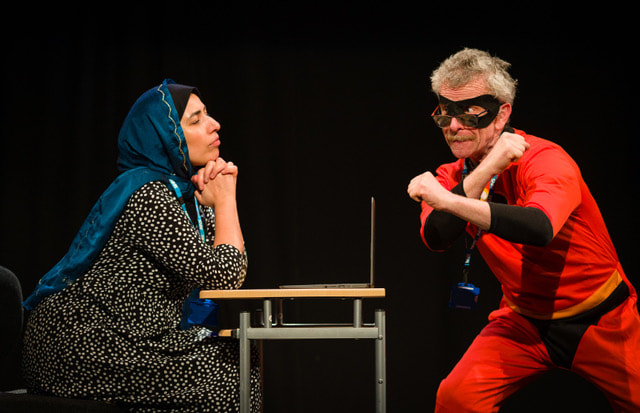 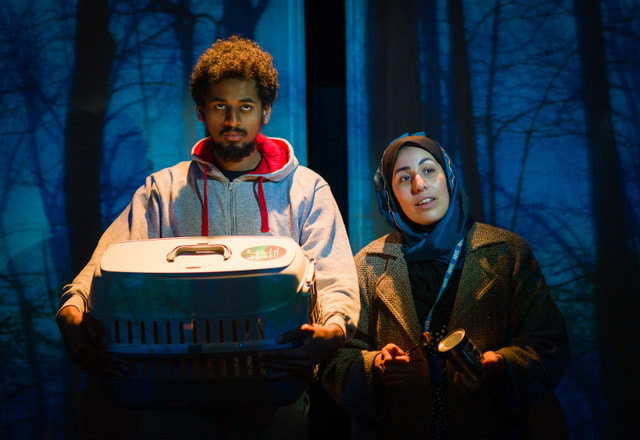 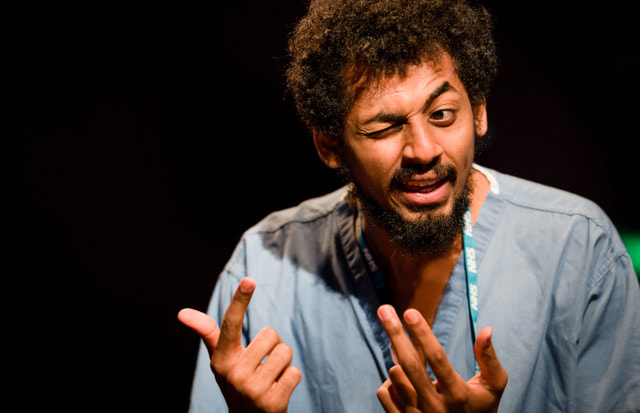 Behind the blue curtain - Daniel, a refugee from Eritrea, now training to be a nurse; Rahmiya, a second-generation Muslim doctor; and David, elderly white cancer patient and discredited academic, fretting about his cat, Roger.

Over time, carers and cared-for become an unlikely, dysfunctional family.

But as life ebbs, reality splinters. Glimpsed in the cracks: the Nazi euthanasia programme, a burns clinic in Africa, a cross-Channel human shipment. And drip by drip David’s far-right ideology seeps out, as he prepares his final incendiary lecture (assuming he lives long enough to give it).

Bonds break, and suddenly both Daniel and Rahmiya’s right to call the UK home seems to hang on a dead man’s lips.

Pipeline Theatre, known for indelible characters and immersive design, takes you into the dark corners with unexpected humour and poignancy, busting taboos while offering its love-letter to the NHS.